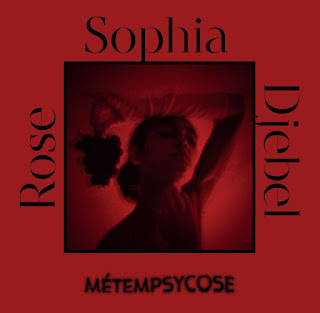 I first met Sophia Djebel Rose through An Eagle in your Mind, an acid folk band from France. Métempsycose is her new personal release after a 7 "which was released in 2020 and which contained 2 songs out of a total of 5 songs from the cassette/cd that were released a little earlier. Here, on her first album, she continues to record folk or acid folk if you prefer songs that radiate an extremely dark mood that seems to have completely haunted all the songs. Accompanied only by the sound of a guitar or from occasionally some other mysterious organ sounds, Sophia Djebel Rose's voice seems to come from very distant and hidden magical places. He sings in French and this makes the songs more seductive. The apparent nudity of the songs, the clear voice and all the feeling that the songs leave is just fascinating. Sophia Djebel Rose's sounds are influenced from her psychedelic folk heroes from the sixties, such as Buffy Sainte Mary, Leonard Cohen or Linda Perhacs. The magical and brilliant folk/psychedelic tracks Vénus and La Clairière really blow out my mind and soul!