Icarus Peel is a talented guitarist/composer. Either with Honey Pot, or with Crystal Jacqueline, or alone or with Acid Reign, he manages to write songs that are remarkable. Here, under the name Icarus Peel's Acid Reign, they record their second album after The Window On the Side Of Your Head which was released in 2018. Here (and here) the guitar dominates, the softly and dreamy moments follow the explosions of guitar derailments and vice versa, the sound goes between The Jimi Hendrix Experience, Cream etc, but also goes back  to Bevis Frond and Barry Watts with Outskirts Of Infinity or Dr Brown. Great acid-rock moments are everywhere on the album, the divided is hard enough, while the psychedelia is present. Top song?  Of course the exceptional shallow ocean, probably the most psychedelic track of the album!

Icarus Peel is an important guitarist who has already join into the psychedelic scene in recent years.

Released on CD and in a limited edition vinyl of 199 copies!

THE THINGZ Just In Time

The Thingz come from Long Beach, CA and Just In Time is their eighth album. They consist of Kim (vocals, bass, theremin), Mike (vocals, guitar), Timothy (keys, vocals) and Jason (drums, vocals). Compared to their previous albums (excluding the Shapes To Come) here they have a new member, Timothy who contributes with his farfisa. As you can see the sound is genuine and wild garage/punk. The songs were recorded in the spring and as they say:

«The Thingz play beach punk from the basement and garage stomp for a world on fire. Songs about revenge from the grave, human farming, the unexpected consequences of unopposable thumbs, the futility of punctuality in a life without clocks, rodent transformation, finding love on the moon, nocturnal animal husbandry and hijinks, historical crimes, paranoia in high places, disaffected demons, leaving the universe via obsolete technology, being trapped between the ice and the lights, and that undefinable and unending journey to the end of everything»

I don’t find any reason to disagree and I just turn up the volume, especially when I listen to the haunt you down with the thermin which demonizes the sound! A genuine r’n’r album from a band that is having fun!! 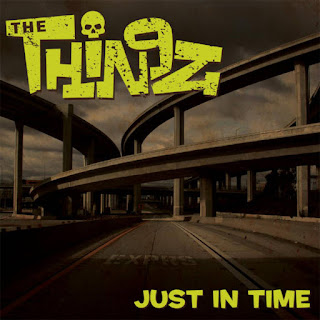 The Beatersband come from Italy and Vol Due is their new cd release (9/2020). Before this album They had released the cd album Vol Uno (4/2019), the mini cd Black Christmas (9/2019) and the single (sold out)  Love Songs,  (1/2020). The Beatersband mainly take songs from the 50s and 60s and adapt them to their own sound. Who's that? pure r’n’r, punk rock, the Ramones would be proud of them, they have beautiful melodic (and thankfully!!) female vocals and their songs are two or three minutes at most! Hang on sloopy and maybe stand out from rest songs. As I wrote about their previous release, if you feel or are a teenager this sound suits you. On 19/9/2020, the new EP album of the Swedes Melody Fields will be release, entitled Broken Horse.This is the second release after their very good debut album of the same name in 2018. The 4 songs of EP are occupied by a pop aura which is extremely intertwined with the psychedelic elements in which these compositions are grafted. The first side songs, Lngsam Dd and Rhymes Of Goodbye are two beautiful dives in the psychedelic east raga. On the other hand, in broken horse and painted sky, Melody Fields scans melodies that sound like they come straight from the sound of San Francisco. Especially in the broken horse the guitar plays the rhythm of Jefferson Airplane Today. Melody Fields in this EP generously offer 4 amazing musical moments which either send us to the east or to the west, the result is enchanting.  Take your copy NOW.