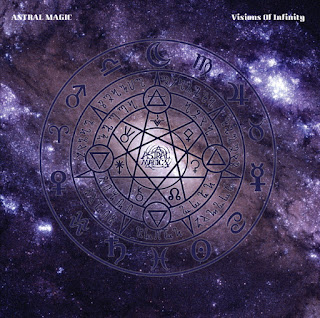 This is the first actual album of the Finnish Astral Magic. Astral Magic is Santtu Laakso (Dj Astro) who plays all instruments, vocals and programming. He is accompanied by Martin Weaver: electric and acoustic guitars, Scott Heller (additional synths on Winds of Time), Samuli Sailo (ukulele on Winds of Time). Visions of Infinity is an exciting space-rock album that offers us some incredible songs that can take us to other universes. I honestly had many time to listen to such wonderful songs gathered on one album.
The tracks, chrononauts, rocking with the aliens, Ancient Mysteries, Winds of Time are immersed in the magic starry sky from which we can see even for a moment the alternations of the intensities of a distant and colorful universe. Last but not least I left creatures from Beyond as it is an amazing song, extremely dark but at the same time it shining like a big bright sun. The celestial beam of that song is glorious.

Astral Magic's Visions of Infinity sounds like it comes from other, non-earthly dimensions and swallows us like a black hole. Set yourself free and enjoy!!