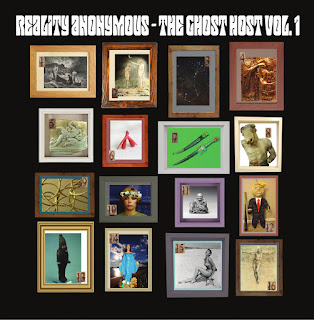 Reality Anonymous is the band of Lyn Vaus (songwriter, vocalist, guitarist) and The Ghost Host, Vol. 1 is the debut album of this band. With him are Philip Stevenson (bassist, multi-instrumentalist, and producer) and Blase Settecase (drummer, percussionist). Vau was a member of the Boston post punk band Carnal Garage, and is also a screenwriter. On the occasion of a movie (Temptation) he started playing music again and released a personal album The Floating Celebration. With the Reality Anonymous they recorded 16 songs of psychedelic pop aesthetics. Soft, velvety melodies are spread in all the songs, revealing the talent of their creator. The secret to realizing this uniqueness of this particular album is to listen carefully and repeatedly to it, so that you enjoy a great album appears. Vaus's voice flows effortlessly bringing to my mind slightly that of Morrison or Ian Curtis, the composition of some songs is at a high level. The hypnotic and sufficiently psychedelic Neti Neti (I Lost My Context Lens) with the discreet use of the sitar,   out of nowhere where the guitars scatter psychedelic arrows, I love her everywhere is the song that brings more than anything else to the Doors, a unique psych/pop cool track. The page boy & the dead letter emerges a pleasant memory of the 80s revival bands (Rain Parade but also the Psychedelic Furs, The Chills etc). In the lyric bride, in its introduction, among other things, a wild Greek voice is heard on the radio, while the wonderful and gentle yemamja flows like a wave in our souls. An extremely remarkable album which I recommend for unlimited listening .