These doctors are two experts in space and how to cure it while traveling in it!! Dr. Space (Scott Heller) and Dr. Martin Weaver. Both of them, as genuine doctors of space, suggest us 9 treatments without, of course, any side effects!! Except of course the side effect of deep enjoyment as we ascend high to infinity. Okay, here one Dr. has taken over the synths and the other Dr. the drums, bass and guitars. The sounds that spring up on this 74-minute album are insurmountable space/rock music but sometimes the sounds, without moving away from it, throw other rays of different music, such as in Afro Ghost Ritual 47, where the drums seems to come from the depths of some forgotten tribal of the jungle (or another planet ?!). Or Funky Caca which is a demonized funk/space with guitars giving commands, bass and drums obeying and effects sending the song in other galaxies. Let me also tell you that From The Depths Of The Universe is simply one of the most futuristic songs of the last decade. So as not to tire you more, let me just tell you one more thing!! Doctors Of Space's Covid Sessions is an unexpectedly inspiring album that looks like the spacecraft leading the fleet with the mission of fully understanding the unexpected!

It is recommended for repeated listening until we feel the feeling that a black hole is attacking us!! 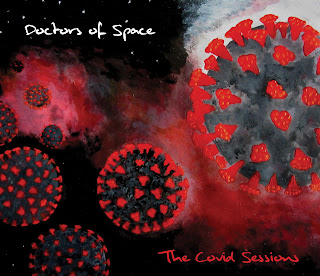