I had acquired Før Lyset Forsvinder (Orpheus-2007) of Nicolai Vilhelm Tell in 2010. An amazing psychedelic album, which included some songs that are truly diamonds, influenced mainly by the respective English sixties bands. Since then, our Danish friend was not released anything else ,until they came our "own" Crystal Thoughts inviting him to record a song that exists in their new incredible album .. Some questions were sent, and here the answers!!!!

When do you remember yourself first time involved with music & how your story begins?

Well it started when I was about 6 years old. My mom and dad bought me a pair of drumsticks, then I knew that I would like to play and make music. I sat and listened to my dad’s old records and laughed of the lyrics. I thought the were strange, but they stuck in my mind and inspired me later on.
I went on Music school, to learn how to play Guitar, for about 12 or 13 years! I’ve only learned to play guitar, all the other instruments I play are self-taught. I played in the usual bands that played the songs of big bands and then, after a couple of years I started to make my own music. Now i´m playing psychedelic rock.
In 2007 we got your amazing debut "Før Lyset Forsvinder" LP by Morten Aron's Orpheus Records. Tell us about it...
One night I was eating dinner in 2002, Morten Aron rang me up! He had read that I sought some musician to play in a Psychedelic rock band. Then he asked me, if I knew Orpheus records? I did! I already had a couple of their releases in my record collection! He asked if I was interested in sending some of my music to them? And of course I was.! Then some time after he send me a E-mail that they wanted me to make a record! At first I would record the album with other musicians playing together with me, but I never thought that it sounded real so I stuck with my own recordings!
Morten Aron asked me, if I would play organ in a band called Ghost Rocket, that he was forming and of course I would! Then my project with ”Før Lyset Forsvinder” was put on hold. But in 2006 or 2007 Ghost Rocket broke up and I thought ”now or never” and Orpheus Records agreed, and then it happend!!!!

The recordings where made in a small room at my parents house and I had to play quit calm because of their neighbor. So that’s the secret about the lo-fi sound!
What about the Tea Company? Are you still active? We checked out few audio tracks & a half-hour gig on YT only. Any recordings, future plans?
Well The Teacompany was thought as a recording project. I was thinking of making a concept album or a Rock Opera about this imaginary town called Mushroom Town. Then I thought ”Why don’t I make a band of my own” Then I started Nicolai Vilhelm Tell & The Teacompany! We played a lot of concert and went on a small tour in Denmark with a Psychedelic blues band called Syreregn! We never got very popular but we played a lot of concerts! Sadly we broke up after a couple of years, it never became what I dreamed of.
I still have a dream of making the record about Mushroom Town and I’ve got all the songs for the album and who knows, maybe some day in the future I’ll make the album through Giraffe Pressings!
A psychedelic organ & drums duo called K.O.T. few words please...?
One day I talked to a good friend. I knew him from when we went on Small Children Teacher College! We’ve played in a band called Antique Peppermint. Well we was talking about getting together again
and play some music! We agreed that it only should be the two of us, me on Hammond organ and Nicholai on Drums!
It clicked from the very start and we actually have enough material for a record but we haven’t got the money yet! So you’ll have to wait some time, but it will happen!
Early 2015 & a great collaboration is on the table...Crystal Thoughts & Nicolai Vilhelm Tell - Inside The Temple LP!! Recorded material between 2013-2015 is in the works. How? Any info about the vinyl's release?
I’m so psyched up about this collaboration! Spiros Rouchotas wrote to me that he was about to make a record and if I would be interested in having one of my songs on it! I answered ”yes of course”. We went back and forth about what song it should be but then we agreed on ”Sofies Verden”.
So it will be a two edition release! A Gimmick edition of 150 h/n copies with Open-Windows Cover and a Privé edition of 50 h/n copies including the Rotating Temple/Giraffe Blacksmith!!! It will be released in mid or ultimo June and I just cant wait for June to come It’s the first time in eight years that one of my songs will be released!!!! So, Greek Psych meets Danish Psych…. A great collaboration and who knows, maybe it’s not the only time we’ll make a record together!!!!
What are your current music influences?
Much of the music that have made an impact on me is Danish psych rock from the sixties and early seventies like Alrune Rod, Bifost, Ache and Skousen og Ingemann. But also Swedish bands like Bo Hansson, Fläsket Brinner, Träd Gräs och Stenar and a newer swedish band called Hedningarna. Maybe it’s because that I have Swedish blood in me that I’m drawn towards Swedish Psych/Folk music. Who knows 
So, any future plans?
Well a lot of my plans I’ve already outlined, but my goal is to release The Teacompany and K.O.T in a not to distant future! Maybe start a psych band so my music can be heard live and play live with K.O.T is a great dream!
Anything last to add?
Just that it’s been a privilege to get the chance to tell about a very important thing in my life…. MUSIC!
Remember to check some of my music on youtube www.youtube.com/user/MrNicotoss/videos! 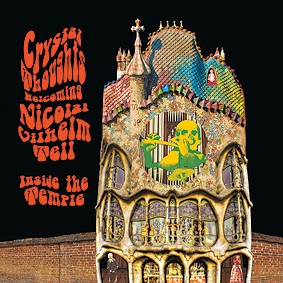